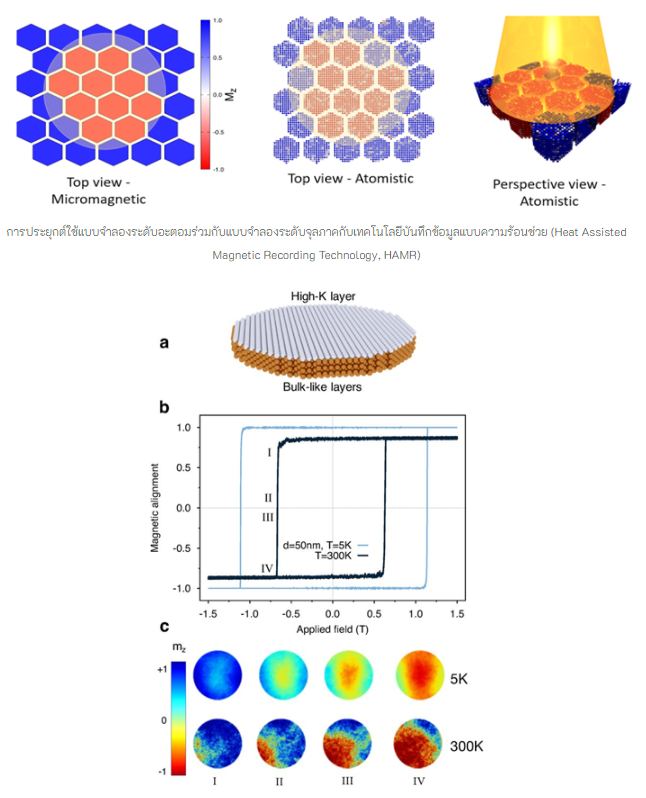 Assoc.Prof.Dr. Phanwadee Chureemart, Department of Physics, Faculty of Science, MSU, has studied about Applied Physics knowledge and developed how to apply it to the data recording technology industry, such as designing of the read-write head of HDD, the magnetoresistive random access memory (MRAM), and spintronic devices, etc.

The atomistic magnetic material model is a powerful tool in the analysis of the properties of magnetic materials. This gives a greater understanding of the complex physics processes occurring within materials and can lead to applications in the design of devices that rely on magnetic properties. The design of devices that are so small at the nanometer scale, a commonly used micro-scale model, could not be applied and described several issues that were of interest, such as heat-assisted magnetic recording, ultrafast laser-induced demagnetization, and the study of surface and interface anisotropy properties in multilayer magnetic material structures, etc.

The model analyzes the effect of individual atoms within material on the magnetic properties of the material. Each atom has a magnetic moment, which is a quantity that indicates the magnetism of that atom. The classical spin Hamiltonian is described as energies that occur in magnetic materials, i.e., exchange interaction energy, anisotropy energy, external energy, bipolar energy, and thermal energy. Then, the magnetization dynamics, showing the change in the magnetic direction, can be calculated from the Laudau-Lifshitz-Gilbert (LLG) equation. It is found that atomic models can be well used in the design of magnetic memory devices by providing computational results that are consistent with experimental studies. A model is therefore a tool that can be used in the design of future memory devices to predict behaviour and design high-performance devices.